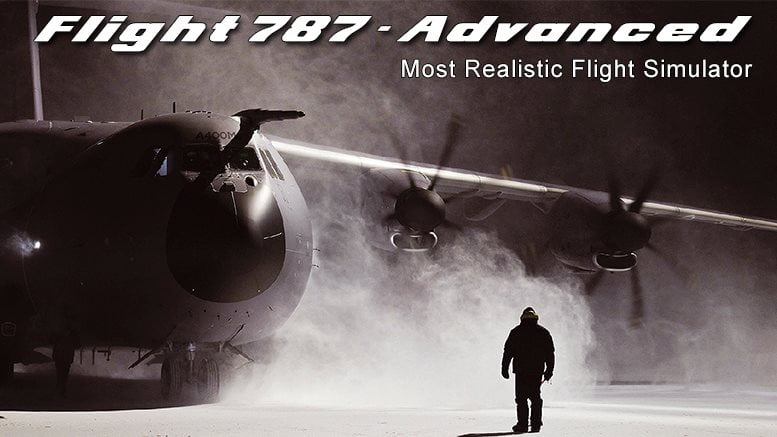 Flight 787 – Advanced is a Flight Simulator game which is integrated the basic operation simplified. It gives the user a sense of a pilot as long as possible. For each aircraft, it is used their own cockpits and also flying planes and operation sequence are terminologically the same. This game can show different control properties for each system.

Here is the news about the game

Before purchasing Flight Simulator – Flight 787 Advanced, please check the system requirements recommended in the download page. With devices under the systems recommended when you want to play the game, whether you can’t get enough efficiency or the game never runs on your device.

What is The Purpose of Flight Simulator – Flight 787 Advanced?

The purpose in this game which is wanted from you is composed of taking-off by following the procedures, following your air route and landing the plane and parking the way as desired. Because of Flight 787 – Advanced has been designed based on the user follows the flight rules, for the moves you make outside the procedures, your flight will be unsuccessful. 3 different start option has been provided in the game.

Game Control and the Use of the Buttons

In the mobile version of Flight 787 – Advanced, the controls are provided by touching the screen and moving the device in various direction. On the game screen, the buttons which are the Brakes (Left Bottom), Power Level of Engine (Right Bottom), Save Screenshot (Top-Right) and the Camera Angles (Top-Left) are used by touching the screen. However, it is not going to work if you push the buttons inside the cockpit directly.

For using the buttons inside the cockpit, you need to zoom to the buttons you wish to use your two fingers just like you do it for the pictures. When you are close to the cockpit buttons, you switch to the user mode. When you are in the use mode, you can touch the buttons but can’t move the camera. For using the camera again, this time you need to zoom out with your two fingers. And when you do that, you switch back to the look around mode.

What are The Buttons and Tools Inside The Cockpit For?

The tools in the game operate in the order you are asked to start. If you don’t follow this ordering, the button doesn’t respond to you or doesn’t operate properly.

APU: It is used as the Main Power Unit in the game, but actually, this concept is the abbreviation of “Auxiliary Power Unit.” Although there is “Auxiliary Power Unit” for providing energy to run the first engines in the real planes, in our game, it is used for running the beginning system of the plane. When you switch this button, the engines get ready to run and the display screen of the plane operates.

Engines: After the APU has been operated you can run the engines. Engine speed transition at the right bottom of the screen has been activated anymore, necessary speed is chosen among these speeds and provides plane move. There are 4-speed types: IDL (Wait), TAXI (Move Slowly), CRUISE (Cruising Speed), MAX (Highest Speed. It is used when taking off.)

Flaps: It is used when taking-off and landing. You can use the flaps to raise the plane swiftly. This is used for taking off the plane from the short runways and for climbing the altitude fast. And also when the flaps are opened during landing, it provides you to land easily with a movement that plane makes raising its force to the air while landing.

Spoiler (Speed Brake): These absolutely shouldn’t be used during cruising or take-off. The basic function of the spoilers is getting the plane’s speed decreased quickly. For instance, when you open the spoilers during the take-off, the plane certainly doesn’t take off. If your speed is more than 150 knots and there is not enough distance to slow during landing, you can lower down your speed with opening the spoilers. Otherwise, it is not recommended to use.

Park Brakes: This feature is added to Flight Simulator – Flight 787 Advanced by 1.7 version. If you floor without release the parking brake, you absolutely can’t make the plane move and you can hear break squeak.

Radio (Radio Button): Tou can’t use the radio without switch on this button. For operate the radio, you have to switch the radio button on. After switching on this button, you can perform all the function you want by touching the radio.

Automatic Runway Stabilizer: Function of the button is to stabilize the runway automatically. Can be used after the takeoff or landing. You don’t need to use it If you think you are good enough.

A/P (Automatic Pilot): If your altitude is more than 3500 m, automatic pilot steps in and steps out automatically near the landing. Its basic function provides the plane straight cruise without following your commands. If you don’t want to follow route frames without climbing the altitude, you can open it. When you operate this button, “Automatic Runway Stabilizer” also steps in at the same time. It doesn’t have any useful or helpful function at all. It makes the plane fly straightly.

Hydraulics Systems: There are two hydraulics systems as Route and Altitude in the game. Route hydraulic controls the plane’s movement to the right or left and the Altitude hydraulic controls the plane’s pitch action movement to the up and down. It has to be opened before take-off. Otherwise, the plain wouldn’t take off. If you turned off this system in the air, you can’t control the plane.

NAV-BEA and CABIN Lights: The abbreviation of the Nav-Bea is “Navigation – Beacon” lights. It closes the flashing lights on the aerofoil, head, and chin. And cabin lights open the lights of passengers.

Light Controls: It enables to open and close the lights located in some part of the plane (landing gear, aerofoil, autorotation, and cockpit). Mostly, the cockpit light is used but arbitrary, all of them can be opened. It doesn’t provide necessity in the game.

Fire Alarm: This system is activated by 2 buttons, it steps in when both of the buttons operationalize in case you touch one of the buttons and operate it by mistake. Usage area; if you land the plane successfully when the landing gear isn’t opened, you can evacuate people by opening these alarms. Also, if you brake while the plane is so fast, tires begin to burn. Such a situation, don’t take off and activate the fire alarm and cancel the flight.

ALTN: It is an Automatic Cabin Pressure button. It should always stay in automatic mode. If it is taken to manual mode, the passengers will die to be out of breath. If you fly this way, unfortunately, your flight will be unsuccessful.

How to Take Off?

Firstly, if you are new at Flight Simulator – Flight 787 Advanced, we recommend you to go to the options and select the “Ready to Fly” option and start from the beginning of the runway. In this way, you can practice and learn to fly fast. Like we mentioned above, the buttons in the cockpit response to you dependently they are linked to each other. Even if the buttons’ position is different in every cockpit, their order is always the same. Now, it is time to show which buttons are operated in which order.

After the successful turn-off, retract the landing gear and then look at the “Target Altitude”. Because this is your cruise altitude, you should climb there.

When you climb the Target Altitude, you will see green frames in the air. This is your guide frames for your route. Fly the plane going toward to these frames and try to collect them. In the ongoing section of your flight, there will be an announcement by the tower for you should descend.  When you hear that announcement, immediately go to the cockpit and descend the plane

Where and How to Land?

The tower will warn you for you are about to pass the runway. When you hear that warning, stop collecting the green frames and descend immediately. If you are new in this step, open the “Automatic Runway Stabilizer” too. Descend plane to at least 200-300 m. You will see the runway after a while. When you see the runway, lower down your speed to the TAXI. Because your descent rate has to be a maximum of 150 knots. If you land with more than that speed, the plane will explode. If the runway is so close and your speed is over the 150 knows, immediately operate the Spoiler (Speed Brake) and lower down your speed fast. Approach the runway well and when you come to the green arrow at the beginning of the runway, tilt the plane to the front and park.

IF YOU WANT TO REQUEST FOR ANY HELP IN CASE A PROBLEM, QUESTION OR SUGGESTION, PLEASE CONTACT US VIA FACEBOOK OR E-MAIL ADDRESS WHICH IS STATED ON THE DOWNLOAD PAGE WITHOUT HESITATION. AT THE VERY MOST 1-2 HOUR WE WILL RETURN TO YOU.

Question: I was played 1.6 version but I can’t update the 1.7 version, what is the problem?
Answer: Flight Simulator – Flight 787 Advanced was compatible with Android 4.1 devices and higher, but 1.7 updates need minimum Android 5.0 version for update.

Question: I want to touch in cockpit buttons but nothing happened.
Answer: You must zoom with 2 fingers like zoom to button. Also please follow the steps, it’s very important for operations.

Question: I will use the radio but not working.
Answer: You must switch on radio button from the cockpit.

Question: I installed Flight Simulator – Flight 787 Advanced but working only main menu, not working buttons, when I press any button, nothing happened.
Answer: It means you have installed illegal APK game. Flight 787 – Advanced includes copy protection, you must purchase the full version.

Question: Can you make Flight Simulator – Flight 787 Advanced for free?
Answer: No, it’s impossible. Game developing is my job. I am an indie developer and I need to earn money for my family and make more games.

Question: I want to buy Flight Simulator – Flight 787 Advanced but I have no credit card.
Answer: You can use other payment methods (its changes for every country). You can buy credit card, innial card, via phone operator, Google Play, and Apple Market cards.

Question: I completed a level in the lite version but not unlocked any levels.
Answer: Already lite version included only 3 levels, lite version was put to market for try Flight 787 – Advanced on your device when you like then buy.

Question: I will make take off when my speed 150 knots but airplane can’t fly.
Answer: You must switch on Route and Altitude hydraulic systems.

Question: I will make takeoff on the runway but my speed stays 90 knots.
Answer: Check the spoilers (speed brakes) speed brakes can’t using takeoff. It can descent airplane speed.

Question: I can’t found my flight video in my device, where is my flight videos?
Answer: Videos can’t be saved to your local disc. Videos saving as online to Everyplace, Youtube, Facebook, and Twitter. You can watch your videos from the main menu. Touch to cube icon for videos.

MartyrX – Just About to be Executed Undeservedly!

Excavator Simulator – Use an Eexcavator

Martyr – Just About to be Executed Undeservedly!